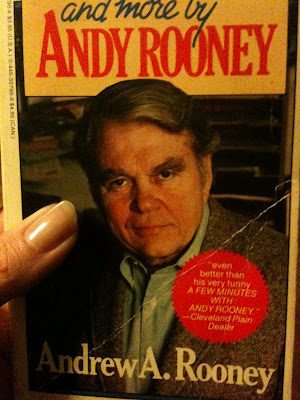 As with any introduction to someone who will have a profound influence on your life – you never forget the day that it happens.

I remember the first time I heard Andy’s distinctive “Did you ever notice?”. . . it was a Sunday evening and the living room was thick with the lingering smell of dinner. As an 11 year old I did not watch a lot of TV, I was more of a book worm like my Mother and preferred to read or draw after dinner and my homework.

As I got older, I began to watch T.V. with my Father (and he did not watch much T.V.) . . . CBS evening news with Dan Rather, Lawrence Welk, Nova, Jacques-Yves Cousteau‘s ocean adventures on the Calypso and anything National Geographic.

Later I found out that one of the reasons my Father enjoyed Andy Rooney, was that Andy once wrote for the Army Newspaper the Stars and Stripes during WWII. It was a connection to a bygone era.

One ritual I could always count on was that every Sunday after dinner, we watched 60 Minutes. As I began to learn more about current events in school and watch more of the nightly news, I found that 60 minutes was a more personal and in depth look at national news stories, with Andy Rooney as my favorite ‘commonsense’ humorist. (I still like to believe that they had his segment last so that we would tune into the whole program).

From dictionaries and design, to bathtubs and neat people – Andy had a way of voicing his opinion in a way that at times made you giggle. I admired his way with words and that even though he had given up his 1920-model Underwood for computers, he had a great sense of humor about it. “Actually, I’ve written on a lot of computers. I had one typewriter for 50 years, but I’ve bought seven computers in six years. I suppose that’s why Bill Gates is rich and Underwood is out of business.”

The first book I purchased by Andy Rooney is beside me now and I am thumbing through it to find, in his words, an appropriate thought to leave you with. As Andy said in his final 60minutes segment My Lucky Life : “I haven’t said anything here that you haven’t already known or haven’t already thought, that’s what a writer does. There aren’t too many original thoughts in the world. A writer’s job is to tell the truth.”

“. . . I look around at the evidence of the day to day things I’ve done and life seems long. Just looking at the coffee cans I’ve saved makes life look like practically forever. We only use 8-10 tablespoons of coffee a day. Those cans sure represent a lot of days.”

Celebrate Andy’s life by heading over to CBS and watching The best of Andy Rooney. You’ll see why my Father and I liked him so much.

Andy’s work will always have a place in my family’s library and for as long as I live he will continue to inspire me to be a better writer, one truth at a time.